This Kedron Brook bush care group grew out of a single tree-planting in mown parkland at Hickey Park in Stafford in early 1981. Under the guidance of local resident Frank Box this became The North Brisbane Forests League, a community group with aspirations for urban forestry across North Brisbane. From 1981 to 1986 this group was actively involved in revegetation along Kedron Brook, both in Hickey Park and further upstream. Through rejuvenation of derelict land they were instrumental in the creation of  Grange Forest Park(GFP) which was officially opened  in 1985.  From this time the group moved the bulk of its operations to this site. Under some inspired leadership by Frank Box the group was involved in extensive Bushland Management Plans and Submissions with an ambitious overview of creating a bushland entity and wildlife corridor from Sparkes Hill to Grange Forest Park. In May 1989 the group changed its name to the GreenBrook Association and commenced publication of a local newsletter known as Bush News (copies can be accessed from this website). Since then the group has worked extensively in this bushland area on the southern banks of Kedron Brook between Mornington Street and Blandford Street. Activities have included removal of rubbish, clearing of rampant weed infestations and planting a diverse range of indigenous plants in order to attract and support as wide a range of local native fauna as possible. In addition the group has created walking tracks, built bridges, been instrumental in the relocation of stormwater outlets, installed a variety of nesting boxes, created an area of native grassland, developed a rainforest area planted specifically to attract butterflies and hosted a large number of work experience students. Because the group has been operating continuously for almost 40 years many areas of initial planting have now developed into well established forest and the park has become a valued asset to the local community. This is borne out by local real estate agents using Grange Forest Park as a selling point and more recently by a dramatic increase in patronage during the pandemic. Frank Box moved away from the area some years ago and currently the leadership of the group is shared by long term members Greg Smith, Greg Church and David Walters. In recent years the number of volunteers has increased and the group has been given permission to extend its activities into the northern area of the park referred to as the ‘clay flats’. This area of land was excavated back to bedrock during the second world war and has gradually been naturally revegetated but largely by weeds. The group is working with Habitat Brisbane to clear the weeds and create an area of natural grassland. 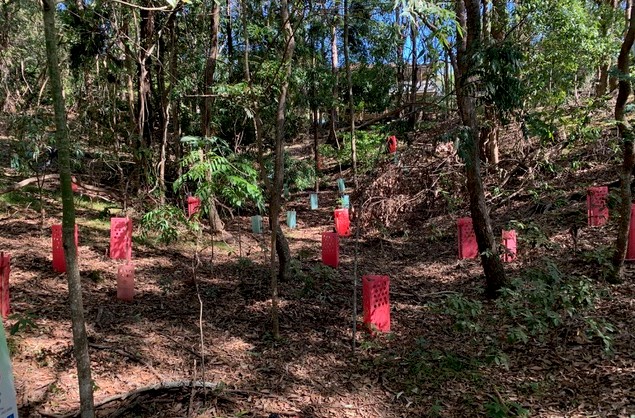 Since its inception the GreenBrook Association has been working on land administered by the Brisbane City Council. At all times the group has liaised closely with the BCC and enjoys strong support from Habitat Brisbane. The GreenBrook Association functions under the broad umbrella of a shared concern by its members for the quality of our natural environment.  There is no formal structure, no membership fees, no office-bearers and no regular meetings apart from working bees.

The group meets at the Blandford St entrance to Grange Forest Park (see map below) on the 3rd Sunday of every month between 8.30 am and 11.30 am. In the good old Australian tradition the billy is usually boiled around 10:30am. Every member is reminded by email in the week preceding a working bee.

The next scheduled meeting for the Greenbrook Association is:

Where to Find Us

At the commencement of each working bee we meet outside the tool shed at the Blandford St entrance to Grange Forest Park.

Over the years the group’s efforts have won public recognition. In 2019 they received a Councillor’s Clean Green Choice Award.

The group’s work was recognised with a Greening Australia commendation in 1988.

Greening Australia Commendation for Outstanding Contribution to the Greening of Australia